Reflexology and Massage: Understanding the Differences and Benefits 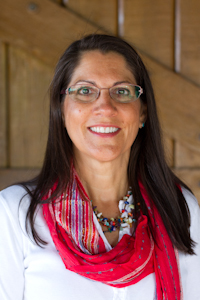 Reflexology is our Modality of the Month! Reflexology: a non-invasive complementary practice involving the use of alternating pressure applied to reflexes within reflex maps of the body located on the feet, hands and outer ears (Reflexology Association of America 201). This guest post on Reflexology is from Deb Kortyna, L.M.T., a healing arts practitioner nationally certified in reflexology, massage and bodywork. Learn more about Deb at desertwindhealingarts.com.

My journey with reflexology began years ago when I picked up a book on reflexology and didn’t quite get it. It sounded interesting but I knew I needed a teacher. When I enrolled in massage school there was a weekend class on reflexology. I took that course before I started massage training and got hooked. This stuff works, even when students are working on one another. Headaches, back aches, sinus congestion were gone!

After this initial class, I enroll in the advanced reflexology courses, but I was starting massage school at the same time. I asked the massage therapists in my class if I could do both, a 200 hour program in massage and a 750 hour program in massage concurrently. They said yes! And I was off and running. It was definitely a lot to learn at the same time. I did find that practicing reflexology requires one to be ambidextrous. You can’t use just your dominate hand and complete a good session. So, in my massage work, I seemed to be naturally ambidextrous and I believe that has benefited my longevity in the bodywork field…completing my 14th year shortly.

My initial reflexology training was 200 hours and included hand, foot and ear reflexology. Once I completed that training, I sat for the national certification exam; American Reflexology Certification Board. That includes hands on demonstration of techniques, 3 hour written exam and 90 documented sessions reviewed to standards.

Since then (2000), I have taken over 600 hours of continuing education in reflexology, participated at the state and national levels of the professional organizations, taught introductory courses through certification program level courses.

A brief history of Reflexology

Modern reflexology is based on the work of two American physicians, Dr. William Fitzgerald and Dr. Joe Shelby Riley of the 1920′s and on that of physiotherapist Eunice D. Ingham who developed Fitzgerald and Riley’s knowledge into a usable therapy, calling it foot reflexology and took it to the public in the late 1930′s through the early 70′s.

The scientific basis to reflexology begins in the last century. In the 1890′s knighted research scientist and medical doctor, Sir Henry Head demonstrated the neurological relationship that exists between the skin and the internal organs. Nobel prize winner, Sir Charles Sherrington proved that the whole nervous system and body adjusts to a stimulus when it is applied to any part of the body. Around the same time in Germany, Dr. Alfons Cornelius observed that pressure to certain spots triggered muscle contractions, changes in blood pressure, variation in warmth and moisture in the body as well as directly affecting the ‘psychic processes’, or mental state of the patient. The Russians, beginning with Drs Ivan Pavlov and Vladimir Bekhterev, have also been exploring reflex responses in the body for nearly a century.

What are the differences between massage and Reflexology?

Some people confuse Reflexology with massage, but they are two different modalities–each with its own strengths. Both, like many other therapies, such as chiropractics, osteopathy, and other somatic practices, involve the use of the hands to apply their techniques. The aim with both Reflexology and massage is to enhance the well being of the client. 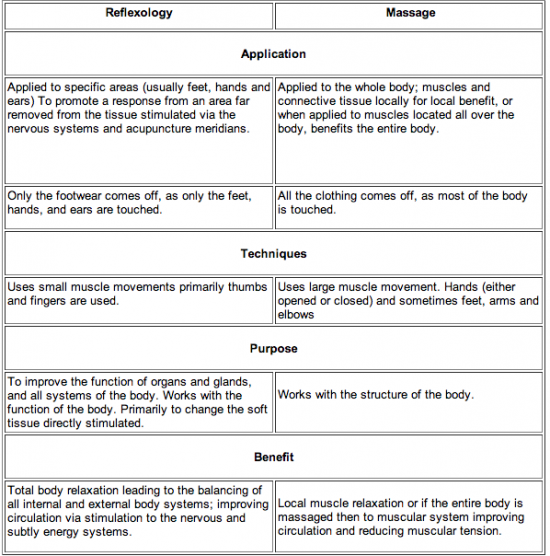 What are the education requirements to become a Reflexologist?

A Reflexologist is a person who uses special pressure techniques on the reflexes of the feet, hands, and ears; one who has studied the principles of Reflexology, anatomy, and physiology generally included in a regular course of study and who has received a minimum 200* hour training certificate or diploma of education in Reflexology, or certification through a national, independent non-profit Reflexology certification board.

Currently, only three states have a law regulating the practice of reflexology (North Dakota, Tennessee, New Hampshire). You may refer to this chart for exemptions, inclusions to massage laws. In general, reflexology is considered outside the scope of practice of a massage therapist.

What can Massage Therapists gain by becoming certified as a Reflexologist?

Most of my practice is massage and reflexology and sometimes both modalities are used in the client session.

When I first began practicing, I was hired at one of the destination spas here in Arizona because I had multiple modalities and reflexology is a popular one especially for our visitors from Europe.

Being a massage therapist and not being certified (at 200 hour level), what is offered as reflexology tends to be no more than a foot rub. I have had numerous guests at the resorts I have worked at comment that what they were receiving (a reflexology treatment) was the “real deal.” Most of these were first time recipients of the work and would rebook with me for this “real deal.” Then, I have had the experience of guests arriving and not wanting to go any longer without their regular reflexology treatment. Without the training I received, I would have been at a loss as to how to work with such a client.

What kinds of patients benefit the most from Reflexology?

Clients first come to me for reflexology complaining of foot pain or neuropathy. Then, they find that their allergies are better, kidney stones pass quickly, recovery from pneumonia is quicker, stress reduced, pain lessened and whole host of issues get better.

Chemotherapy induced neuropathies can be reversed or greatly lessened with reflexology treatments.

I have eased the pain of an infant teething with foot reflexology!

What are the benefits of reflexology

Research has shown the specific techniques of reflexology to be effective and beneficial in many ways. A survey of 170 reflexology studies from 21 countries shows that reflexology is effective, impacting a variety of physical and psychological concerns.

In general terms, the benefits of reflexology have to do with the reduction of stress. Because the feet and hands help set the tension level for the rest of the body, they are an easy way to interrupt the stress signal and reset homeostasis, the body’s equilibrium (source).

I do massage and includes acupressure learnt from Kinesiology, I do not do reflexology, however sometimes I find lumps and sore points on foot, I can usually make educated guess what I am touching on. When Massage is over, lumpiness and soreness in foot is diminished. So it all works really well together, reflexology is great, massage combines with other alternatives is great too !   — Posted @ Monday, September 02, 2013 2:10 PM by Kim Wood

Reflexology is a very good and effective treatment technique, especially for neuropathy patients. — Posted @ Monday, March 10, 2014 7:14 AM by JoCasta Zamarripa