The True Power of Touch 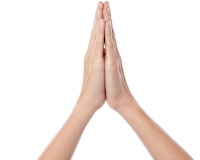 [Image courtesy of stockimages at FreeDigitalPhotos.net.]

This time of year I find myself reflecting on all that I am grateful for and the people in my life whom have made a profound impact on me. One such person is no longer with us any more, yet she remains a vivid testament to the power of touch and the honor of being allowed to touch someone. I met this woman in a drumming circle. She was probably in her late 60s at the time (I’m not very good at guessing age). She was a retired teacher and a very loving soul. She also had several major physical ailments. I asked her if she was receiving massage. She told me she was very uncomfortable with her body – she had received a radical double mastectomy 30 years before. I tried to allay her fears and told her that I would help her find someone with whom she could feel comfortable. She looked at me and very quietly said these words that I will never forget, “I wish you were still in practice because I know you wouldn’t judge me. You are at ease with your body.” I reflected on what she said and told her I would come out of “retirement” to gift her a massage.

When she came for her session I decided to start her in a supine position. After working on her neck and head for a little while, I began working on her chest. I had never seen such devastation caused by a surgeon. It was difficult to maintain my objectivity and not cry. Well, actually I did a little. We both did. I acknowledged to her that the way her body looked was not the result of anything she did and that unfortunately, at the time when her surgery was performed, they didn’t have the same knowledge or technology that was current. I had her breathe into the area and visualize sending love to that section of her body. As I worked on different muscles I would describe how the damaged tissue restricted her movement and what she could do to extend her range of motion. I also pointed out what was working well and the incredible way other parts of her body compensated so she could function. By not pretending that everything was “fine” and also acknowledging the magnificence of her form, she totally shifted her self-image. It was a very powerful session for both of us. I felt so honored that she trusted me with her body. After the session was over, she thanked me and said that she now felt comfortable finding another massage practitioner. She continued to receive massage on a regular basis.

Those who touch for a living are truly blessed. Every client you see is a work of art. You are the lucky sculptor who gets to help smooth and lengthen tissue, release holding patterns and facilitate balance. I invite you to acknowledge the true beauty and magnificence of every client, regardless of their appearance and physical condition. And be thankful for the honor your clients bestow upon you by allowing you to touch their bodies and their souls.