Why Massage Therapists need to be on Google Plus 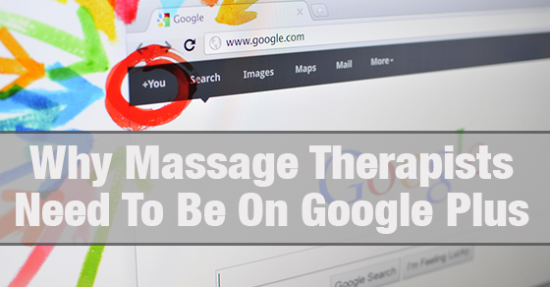 Orlando-based massage therapist Lu Mueller-Kaul has been pushing the button and seeing the results first hand for about a year now. Lu is an active participant on Google’s social network, Google Plus, and she says that hopping on the G+ bandwagon is a no-brainer.

**UPDATE: As some of our readers have observed, we do want to make it clear that simply being on Google Plus isn’t a magical solution to your Google ranking, and that your Google Local page and other SEO efforts are important. We’ll have a blog post coming soon about it!**

Why should busy massage therapists who are trying to juggle family, friends, practicing massage and running a business even bother with yet another social network?

“Because Google rewards it,” says Lu. “Google wants you to use their social network, and they’re really not shy about making the rewards obvious.”

Since Lu’s practice, Balance Orlando, has been more active on the network they find themselves now on Page One of Google for the search phrase “Massage Orlando”. Think about that.

Before the newest updates of the Google algorithm (the way Google decides what webpages get served up for a search result) Lu’s practice was ranking on pages 2, 3, 4, 5. And amazingly, they had even invested LOADS of time and money into www.balanceorlando.com and still not been able to make their way onto Page One. 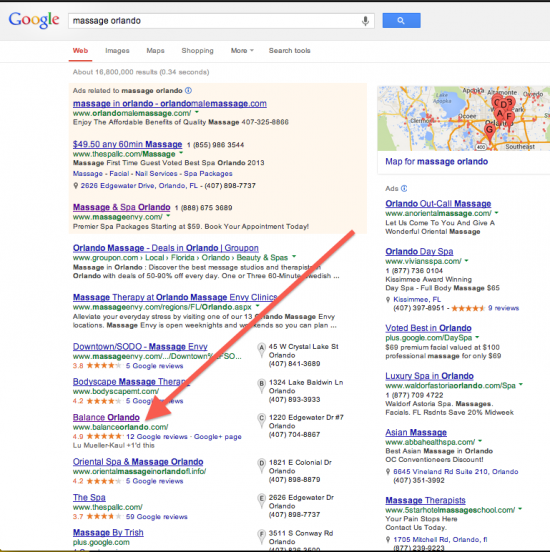 Bear with me while we review a key point. WHY is it so important to rank well on a Google search?A key ingredient to massage therapy marketing: we need to be friends with Google. Like Starbucks, there’s a Massage Envy and a Hand and Stone on every corner. It’s tough to get noticed and the competition is fierce. Even Lu with her successful practice can relate, “I just had to tell all my therapists that really, they HAVE to have same day availability, because now people expect that. It’s not like it used to be.”

We only have a chance to compete by being found easily.

Lu got found. She knew it wouldn’t be easy to get onto Page One of a Google search for “Massage Orlando”. While her practice had done well with specific keywords, like “myofascial release” or “piriformis syndrome”, she knew that “massage Orlando” was very hard to rank well for. After all, there are four thousand businesses in Orlando who are competing with them. How do you get to Page One with those kinds of odds, and in turn, get found by new clients?

Traditional search engine optimization (SEO) techniques only go so far these days. You might have a great website that has all the right keywords and metadata and links, but the real way to win search these days is through content (like a blog) and social media activity, especially Google Plus activity.

Lu swears that Google Plus users are smarter, too. “People are more intelligent on Google Plus. Seriously. I want to see charts with average IQs of the different social networks). Conversations and discussions are just at a higher level.”

Do this little experiment. Compare what’s going on in massage therapy groups on other social networks: Facebook groups, LinkedIn groups, and the Google Plus community that Kelli Wise started. One of the real ways that Google Plus shines is in it’s Communities.

But just like other social platforms, the early adopters get ahead.

“I’m one of VERY FEW massage therapists who are there… and there will be more.” says Lu. That gives her a big advantage. She says she’s had the opportunity to be an influencer and thought leader in the massage community, an opportunity she wouldn’t have had on a larger network.

Are you saying right about now, “But I’ve heard nobody uses Google Plus and I’ve been there before… it’s a ghost town!”

That may not be true anymore. Sure, there aren’t as many users on Google Plus as there are on Twitter, but the network is certainly growing.

Earlier this year Google Plus moved to 2nd place in the world of social media activity. Yes, Facebook activity way outnumbers Google Plus, YouTube, and Twitter, but like Lu says, it may be a matter of quantity over quality.

And let’s not forget the power of Google Hangouts! But we’ll save that one for our next post, The Massage Therapist’s Ultimate Guide to Google Plus.

Leave a comment or question below, and we’ll try to include it in the guide! And while you’re at it, add me to your circles!

It’s much more than just “being” on Google plus. It’s knowing how to use it properly. There are a great number of people spamming on G+ thinking that’s how they get higher ranking. It’s the interaction and using G+ to the full. Our community has close to 1,000 members now, but only 10% interact and le ss than 1% join our monthly live hangout. But those that do, get the rewards of better visibility and interaction with colleagues and people in their local community. — Posted @ Tuesday, October 08, 2013 11:08 AM by Jamin Rak, LMT

Excellent points in this article. It inspired me to finally look into a Google Plus presence for my Thai Massage school. — Posted @ Wednesday, June 25, 2014 12:00 AM by Shama